I finally (ok, I’m exaggerating a little, but I really had been wanting to make this bag for a while now) got round to making an Aeroplane Bag yesterday. It was one of those perfect situations where the fabric arrived on a day when I actually had some time to sew, and I also happened to have all the other required bits and bobs on hand. Including the British equivalent of Annie’s soft and stable, which according to various sources is functionally the same as 3 mm scrim foam used for car upholstery, and easily available for not much money on Ebay. Win.

The fabrics are a selection of Field Study linens in the Charisma palette, with these gorgeous feathers for the lining. I added an outside slip pocket between the straps on one side, and I am inordinately proud of my mad pattern matching skillz: 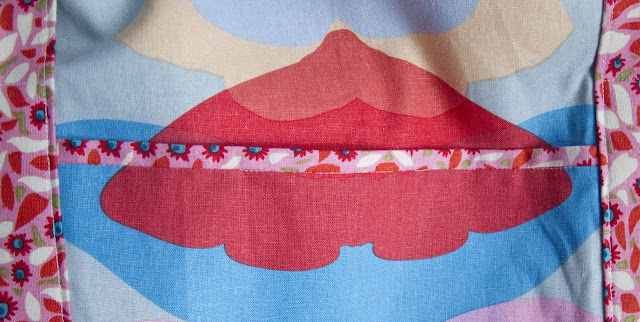 The other small change I made to the pattern was to replace one of the inner zipped pockets with a patch pocket. Mainly because I am lazy, but partly because I don’t really need that many inner pockets in a bag this size. I’m thinking it’s going to get most use as a weekend bag, in which case I will also have my handbag with me to carry around the massive amount of crap I seem to accumulate.

I was really impressed with the speed that the bag came together. As you can see, I opened the fabric parcel at 11.31 a.m. and had a finished bag at 5.21 p.m., having fitted in two school runs. I can neither confirm nor deny that I took an iphone photo while driving. Ahem. 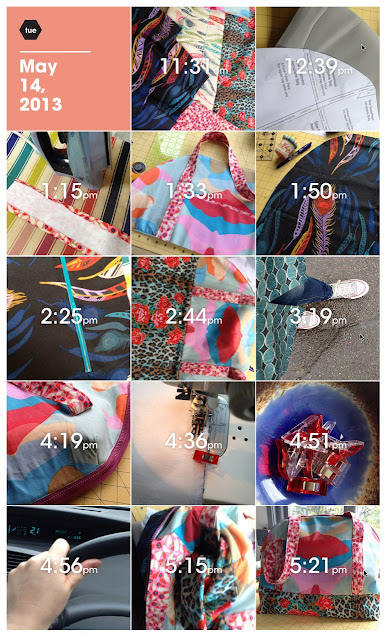 These photos were taken with my new favourite app, Days, which allows you to document your day in photos and then publishes them all as a mosaic at the end of the 24 hour period. I don’t think I’ll do it every day but it’s pretty cute for things like this. 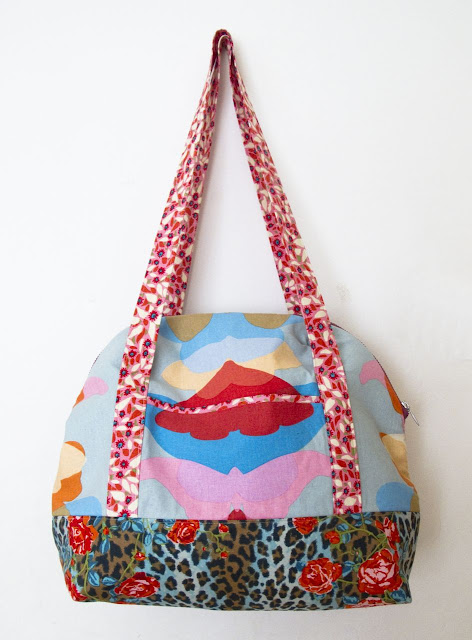 So, bottom line, this is a well-written pattern that makes a really nice and functional bag without too much faffing about. I love that the depth is created by boxing the corners instead of sewing in separate side panels. There was a little swearing when it came to the zip, but that was overcome by unpicking some of the machine stitching and finishing it by hand.

Oh, and the Juki? It was a star! I love that machine!

Linking up for this month’s Le Challenge: Wings (because of the butterflies, of course)