Christmas for this Jewish girl is essentially an excuse to bring an extremely oversized bit of forest into the living room. As my son says, “who wouldn’t want a Christmas tree? Christmas trees are FAB!” The  crazy puppy who lives in this house has scuppered our usual plans, however. I have no doubt that she would eat/knock over/otherwise destroy every single decoration she could reach, and probably the tree itself.

With that in mind we decided to go for a very small (i.e. tabletop), very fake tree this year. And taking my inspiration from (ok, shamelessly ripping off) Melody Miller’s booth at Market I decided on a white tree. Embrace the fake. I would have gone for pink, but I couldn’t find one. 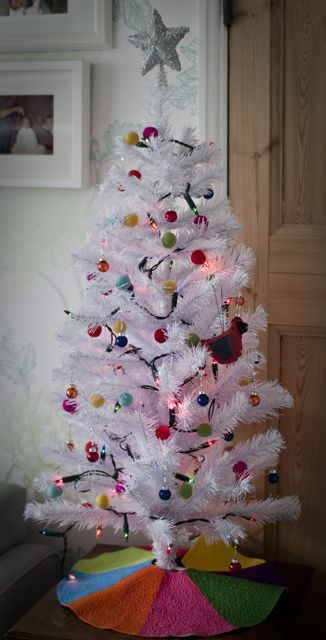 I bought some gorgeously squidgy and colourful felt balls from BigFish on Etsy. You can buy a premixed bag of colours or choose your own, and they are fairly traded too, which is fab. I strung them together with nylon thread and used them as a garland. Some multicoloured fairy lights (with green wires, annoyingly) and teeny baubles and that was that. Until Amy gave me the world’s cutest bird in the LMQG ornament swap, which now has pride of place slap bang in the middle of the tree. 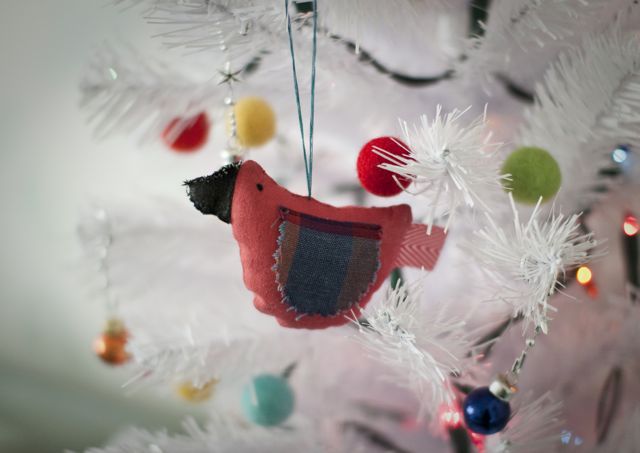 Oh, and I might have spent rather too long making a tiny but very colourful tree skirt. I took the opportunity to practice some FMQ skills. All I can say is that I could use a hell of a lot more practice.