*an unpleasant combination of stubborness and contrariness. Not to be confused with determination, which is an excellent characteristic.


The London Modern Quilt Guild challenge for this month is to create a mini quilt (maximum 12 inches square) that represents your own definition of modern quilting. A selection from the group will then be displayed in John Lewis (a major department store in central London).


My personal definition of modern quilting is the freedom to create something a bit bonkers. Perhaps using a design that wouldn’t normally be considered ‘quilty’. To use fabric in unexpected ways.


Last year my friend Sally blogged about QR-3D – a project to create artwork based on QR codes. I totally missed the boat on it first time around, but really loved the idea. It’s been mulling around in my head ever since.


So, how best to make a block that uses 625 (count ’em!) teeny squares and needs to finish at less than 12 inches? Naturally I thought of this fantastic method by Elizabeth of Oh, Fransson where the pieces are fused to interfacing and then sewn together. It’s a brilliant technique that I have used before with great results. So, one giant piece of interfacing was marked up, millions of 3/4 inch squares were cut (yes, they needed to finish at 1/4 inch) and the whole shebang was fused. The code worked when I scanned it, so I started sewing. And sewing. And sewing. Fifty seams to sew, trim and press. It’s possible that the sole of my iron is now covered in melted interfacing. 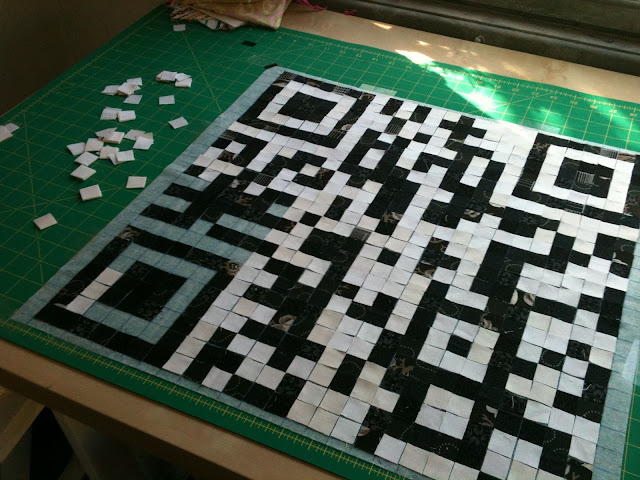 When it was finished it looked a bit wonky, but the proof is in the scanning. Which was a dismal failure. Looking at it you can see what the problem is. The three corner squares – the part that says “I am a QR code!!!!!” – are not exactly square, to put it mildly. Cue swearing, tears and the previously mentioned bloody mindedness.

I realised that I needed to minimise the wibbling around of teeny squares that had been so disastrous in attempt number 1. Foundation paper piecing is the best way I know to do that, so I drew the pattern out in 25 teeny strips (10 inches long and 3/4 inch wide) and spent the best part of four hours sewing, trimming, pressing, sewing, trimming, pressing… You get the idea. 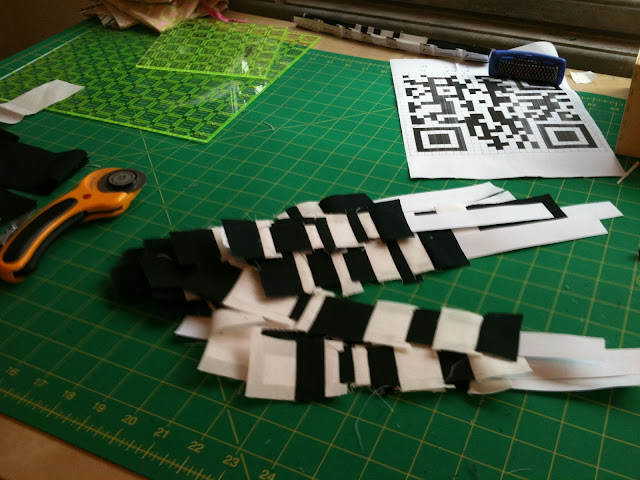 It was a bit unnerving spending a whole day (yes, I know, what about realjob, and laundry, and cooking, and housework) without knowing whether it would work in the end. Finally at 10.30 I attached the borders and fired up the QR reader app on my phone. And YES!!!!!! It worked!!!!!!

I think I had better get on with all the stuff that got ignored yesterday. Ooops!